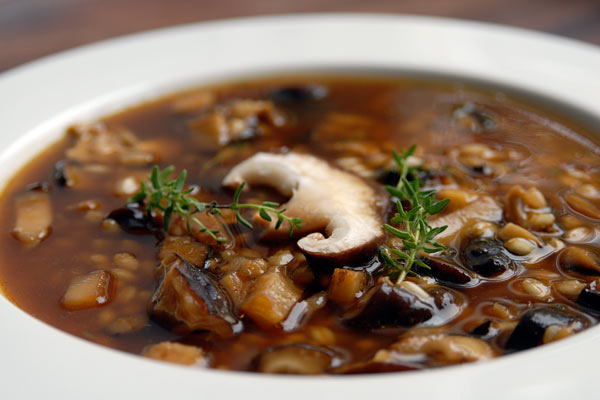 Sometimes, though, I think of his cooking and his phone calls:

His meatballs were really mini Italian meat loaves, so who could ever miss such an opportunity?

The soup was always winter. Nobody simmers a beef barley soup for hours, in New Orleans, during summer. His soup was always so rich and filling. French bread on the side. A salad.  All that pyramid stuff.

I never asked my dad for his soup recipe. So, over the years, I’ve developed my own. Only thing I added was mushrooms – cuz I like them and they are cheaper now than when he was making this soup.

Today,  in honor of my dad,  we made beef/barley/mushroom soup. We listened to Janis Joplin and I smiled at Bobby McGee. My dad loved that song. His nickname – until he died at 80 – was Bobby.

Save all your veggie scraps. Put them in baggies or other freezer containers.
We even freeze unused lettuces. Put them all in your freezer. When you have time, simmer them for a couple hours with seasonings you like. No salt. Sometimes I add a bag of frozen veggies. I over cover all the veggies with water – in a deep stock pot. I mean really over cover the veggies with water.   Many inches above the veggies. (Hint: if you keep the skins on the onions you freeze for broth, it gives a wonderful color to the broth)

Then just simmer away one day. Drain off the veggies and discard them. Let the broth cool on counter. Freeze half and put half in fridge for the soup. It would be about 10 cups that you’d save for the soup. Other broth, freeze in containers for rice pilaf or other cooking liquid.

1.5 pounds  stew meat – take as much fat off as possible and cut the beef pieces to about an inch each

take as much fat off the meat as you can and cut into inch/half inch or so pieces. put that aside.

chop up your onions and carrots.

put some olive oil or whatever oil in a large pot. heat it up.

add your chopped onions and carrots. cook that down a few minutes – until soft and the onions are sorta clear.

add your meat and seasonings and cook that down until still red but sorta brown on the outside.

then add your broth – about 10 cups – and the mushrooms. Lots of mushrooms. Bring to a boil for 2 mins or so. Bring it way down to a slow simmer for 2 hours or longer if you can.  Stir now and then.  Taste for your preferred seasonings.  Not much salt yet.

Add your barley and rice. Cook 45 mins or so.  Stir often.  It may need more salt at this point but not much.  Add more broth if necessary.

Serve with a little bit of parm cheese sprinkled atop it.

At the time, I’d been married almost 30 years.  Because it was proper; because I felt safer against myself; because I was saving money for an apartment, I’d moved in with my parents during my divorce process.

Shortly after my divorce, I met a man on the internet. A pilot for a major airline.  He seemed so cool.  Smart.  Intellectual.  Liked the arts.  Now and then, his schedule took him to New Orleans.  We’d have a lovely week-end.  Or he’d use some special flight pass and I’d fly to meet him somewhere.  And we were going to marry and live forever together.

And then he told me he was married.  And I was sobbing in my parents’ courtyard.  And I was so pissed at myself.  And my father came out.  And I told him all the sordid details that had led to my sobbing.  And he said:

“You are a beautiful woman.  One day you will meet a man worthy of you.  I hope you won’t stay in this relationship.  It isn’t going anywhere.”

I found a huge amount of comfort and hope in those words.  That I was beautiful.  That he knew I hadn’t given up on love.  That there was someone else waiting – like me.  That I’d been raised with values I believed in.  That fathers  don’t judge.   Fathers hope.

And that was a great gift from my father.  His knowledge of me and his hope for me. ..

And he liked you!

It’s Father’s Day.  It’s another reason to celebrate being married to you.  You’ve gone hiking with your son.  While you’re gone,  I’m going to make your favorite meal.  Pot Roast.

At His Wake That Day
Sometimes comes the bagpipes sounding
and the rain pounding
and all round the room there looms
the final sadness of good bye.